How Cyclone Hudhud got its name

Did you know Cyclone Hudhud, expected to hit India's south-eastern coast on Sunday afternoon, was "born" in Oman?
We are talking about the name of the cyclone, not the storm itself. The cyclone itself originated in the north Andaman sea in the Bay of Bengal and is now hurtling towards Andhra Pradesh and Orissa states.
The name Hudhud in Arabic refers to the Hoopoe bird.
Hurricanes and tropical cyclones in the Atlantic have had their own names since 1953, a convention begun by Miami's National Hurricane Centre and maintained and updated by the World Meteorological Organization (WMO), a Geneva-based agency of the United Nations.
But naming came to South Asia and the Middle East only recently.
It was just too controversial to do the same around the North Indian Ocean

For years cyclones that originated in the north Indian ocean were anonymous affairs.
One of the reasons, according to Dr M Mahapatra, who heads India's cyclone warning centre, was that in an "ethnically diverse region we needed to be very careful and neutral in picking up the names so that it did not hurt the sentiments of people".
But finally in 2004 they clubbed together and agreed on their favourite names
That was when an international panel on tropical cyclones led by the WMO sat down and decided to name their cyclones as a committee in the spirit of co-operation and consensus.
Eight countries - India, Pakistan, Bangladesh, Maldives, Myanmar, Oman, Sri Lanka and Thailand - took part. They came up with a list of 64 names- eight names from each country - for upcoming cyclones.
The list goes alphabetically, according to each country. The last cyclone in the region was Nanauk in June, a name contributed by Myanmar.
Names can be suggested by the general public in the member country or by the government. India, for example, welcomes suggestions on the condition that the name must be "short and readily understood when broadcast, not culturally sensitive and not convey some unintended and potentially inflammatory meaning".
"A storm causes so much death and destruction that its name is considered for retirement and hence is not used repeatedly," a statement by India's weather office says.
So this time, following the alphabetical order, it is Oman's turn
Last year, Phailin, the name for a massive cyclone which battered India's south-eastern coast and led to the evacuation of more than 500,000 people, was provided by Thailand. Some of the Indian names in the queue are the more prosaic Megh (Cloud), Sagar (Ocean) and Vayu (Wind).
The Hudhud, or hoopoe bird, is an exotic creature noticed for its distinctive crown of feathers and is widespread in Europe, Asia and North Africa.
Next time a cyclone hits the region, it's Pakistan's turn to give it a name
It will be called Nilofar. Last time Pakistan named a cyclone was Nilam in November 2012.
The names will not dry up anytime soon. Dr Mahapatra says Hudhud is possibly the 34th name of the list, which means there are 30 more in the queue. The panel of cyclone experts meets every year, and they will be replenishing the list whenever the need arises.
It's not that the list of 64 names has been without controversy
Cyclone Mahasen, which hit in 2013 and was named by Sri Lanka, was changed to Viyaru after protests by nationalists and officials in Sri Lanka. They said Mahasen was a king who had brought peace and prosperity to the island, and it was wrong to name a calamity after him.
Nevertheless, it is important to name cyclones, say experts
A name helps people and the media to identify each cyclone and become more aware of its implications. It also does not confuse people if there is more than one tropical cyclone brewing in the region.
And these cyclones often prove to be deadly - their names resonate for a very long time.
Posted by SKSSF step at 01:06 1 comment: 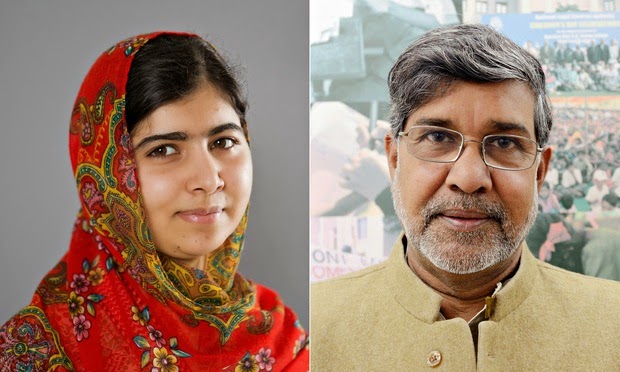 Pakistani child education activist Malala Yousafzai and Kailash Satyarthi, an Indian child rights campaigner, have jointly won the Nobel Peace Prize.
At the age of just 17, Malala is the youngest recipient of the prize.
The teenager was shot in the head by Taliban gunmen in October 2012 for campaigning for girls' education. She now lives in Birmingham in the UK.
The Nobel committee praised the pair's "struggle against the suppression of children and young people".
Mr Satyarthi, 60, has maintained the tradition of Mahatma Gandhi and headed various forms of peaceful protests, "focusing on the grave exploitation of children for financial gain," the committee said at the announcement in Oslo.
Reacting to the news, he told TV news channel CNN-IBN: "It's an honour to all those children still suffering in slavery, bonded labour and trafficking."
Malala first came to attention in 2009 after she wrote an anonymous diary for BBC Urdu about life under Taliban rule in north-west Pakistan.
She was shot when gunmen boarded her school bus in the Swat Valley.
She has since recovered from the attack and has remained in the public eye, publishing an autobiography and addressing the UN General Assembly.
Pakistan's Prime Minister Nawaz Sharif congratulated Malala Yousafzai, calling her the "pride" of his country.
"Her achievement is unparalleled and unequalled. Girls and boys of the world should take the lead from her struggle and commitment," he said in a statement.
Malala was named one of Time magazine's most influential people in 2013, and awarded the EU's prestigious Sakharov human rights prize that year.
This year's record number of 278 Nobel Peace Prize nominees included Pope Francis and Congolese gynaecologist Denis Mukwege, although the full list was kept a secret.
Former NSA contractor Edward Snowden and Russian newspaper Novaya Gazeta had also been tipped as favourites for the award.
Posted by SKSSF step at 03:15 1 comment: 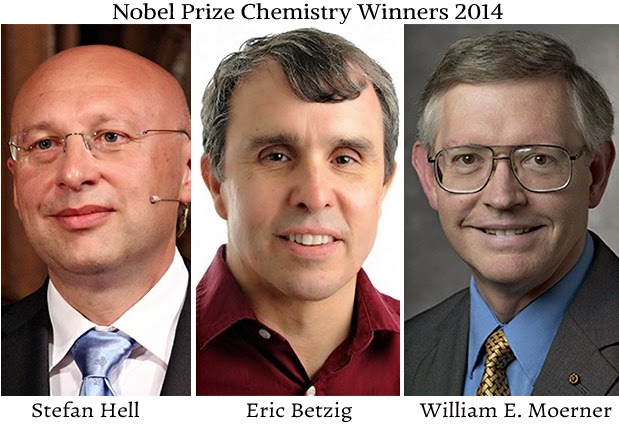 The Royal Swedish Academy of Sciences has announced that the Nobel Prize for Chemistry for the year 2014 is being awarded to Eric Betzig, Stefan W. Hell and William E. Moerner “for the development of super-resolved fluorescence microscopy”. For years, it was assumed that the resolution that could be achieved by optical microscopy was limited to half the wavelength of light. These three scientists overcame this perceived limitation with the help of fluorescent molecules. Their work has made it possible to “study molecular processes in real time” according to the Nobel Committee Chair. The winners will share the prize money of 8 mn kroner.

It was assumed by the scientific community that it would be impossible to study living cells in its tiniest molecular detail. The microscopist Ernst Abbe had set 0.2 micrometres as the maximum resolution that could be achieved through optical microscopy. This development took place in 1873, and for decades no scientist could achieve a better resolution. These three scientists surpassed Abbe’s limitation and enabled scientists to analyse the nanoscopic world. The scientists have been awarded for their work with two different approaches, namely, stimulated emission depletion (STED) microscopy and single molecule microscopy.

Stefan Hell developed the STED microscopy method in 2000. To better Abbe’s resolution, he used two laser beams. One beam stimulated the fluorescent molecules to grow, while the other beam cancelled out all fluorescence except that in a nanometer sized volume.

Work of Betzig and Moerner

Betzig and Moerner worked with single molecule microscopy. This method is based on the ability to turn the fluorescence of molecules on and off. A couple of different molecules are allowed to glow each time the image is recorded;. Then, all the recorded images are superimposed to form one complete image covering all molecules. This method was first tested in 2006.

Eric Betzig is an American citizen who born in 1960 in USA. He is a Group Leader at the Janelia Research Campus at the Howard Hughes Medical Institute in USA

Stefan W. Hell is a German citizen who was born in Romania in 1962. He is Director at the Max Planck Institute for Biophysical Chemistry in Göttingen, and Division head at the German Cancer Research Center in Heidelberg, Germany.

William E. Moerner is an American citizen who was born in USA in 1953. He is the Harry S. Mosher Professor in Chemistry and Professor of Applied Physics at Stanford University in USA.
Posted by SKSSF step at 01:42 1 comment:

The Minister for Minority Affairs, Najma Heptullah, announced the establishment of a nation level skill development Academy, “Maulana Azad National Academy for Skills” (MANAS) with headquarters in Delhi.
MANAS will focus on providing skills, upgrading abilities and training members of minority communities in those sectors of the economywhich are either facing a shortage or labour or where demand for labour is expected to surge. MANAS will also train people so that they may be self-employed. The National Minorities Development and Finance Corporation (NMDFC) will provide assistance with credit for persons who have undergone training at MANAS and wish to establish their own business or be self employed. MANAS will also collaborate with multiple national and international agencies to provide certification and assistance with placement for the trainees, and also to secure funding for the program.
A MoU was also signed by MANAS and the National Skill Development Corporation to establish an All India Collaborative Network for MANAS.
Posted by SKSSF step at 01:36 7 comments: